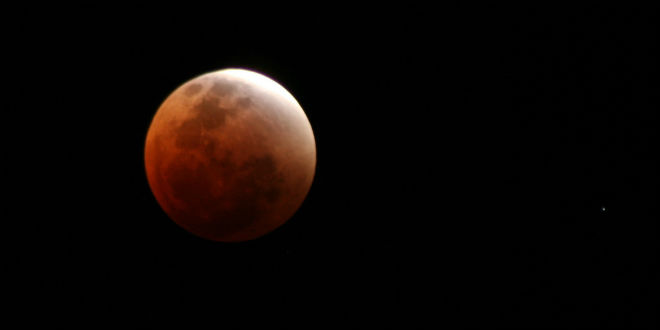 Rabbinic Expert: First Super Blood Moon of the Year Sign of Earthquakes, Governments Will Fall
Blood moon. (Credit: Nabarun/Wikimedia Commons)
https://www.breakingisraelnews.com/119523/rabbinic-expert-first-super-blood-moon-of-the-year-sign-of-earthquakes-governments-will-fall/amp/
On the evening of January 21, as the holiday of Tu B’shvat begins, a lunar eclipse will pass over the Washington D.C., just as the President will reach the halfway point of his term in office. The eclipse will be a super blood moon, described in Jewish sources as having powerful significance.

On the Gregorian Calendar:

The lunar eclipse will be visible in its entirety from North and South America, as well as portions of western Europe and northwest Africa, on the evening of Sunday, January 20 and in the early morning hours of Monday, January 21. The evening of the eclipse will be a supermoon when the moon is at its perigee, the point in its month-long elliptical orbit that brings it closest to Earth. At that time, the moon appears up to 14 percent bigger and 30 percent brighter than at its apogee, its furthest point from Earth.

This will not only be the first lunar eclipse of 2019 but also the year’s first supermoon.  At that time, the proper conditions will exist to create a blood moon in which the moon has a distinctly reddish tint. This will be the last total lunar eclipse until May 26, 2021.

On the Political Calendar:

The date also marks the halfway point of Donald Trump’s presidency, coming exactly two years after he was sworn in as the 45th president of the United States. It should be noted that Trump was born on the night of June 14, 1946, within fifteen minutes of a total lunar eclipse and 700 days before the state of Israel was established. Trump’s lucky sevens did not end there. When he was sworn in as President on January 20, 2017, he was 70-years-old, seven months and seven days.

On the Jewish Calendar:

The holiday of Tu B’shvat, the 15th day of the Hebrew month of Shvat, begins at sundown on the same day. Known as the new year of the trees, Tu B’Shvat is one of four “New Years” mentioned in the Mishnah (the oral law).

Rabbi Mordechai Genut discussed the lunar eclipse in his book Davar B’ito, a guide to the calendar based on esoteric Jewish sources.

“A lunar eclipse in the month of Shevat is a sign of the rise of the aspect of din (judgment) in the world,” Rabbi Genut told Breaking Israel News. “This eclipse will rule over the Americas but for Israel, it will bring chesed (loving-kindness).”

Rabbi Genut described specifically how this judgment will be expressed.

“There will be a marked increase in earthquakes and volcanoes, even more than we have seen in the past year,” Rabbi Genuth said. “Just as the eclipse is a conflict between the sun and the moon to rule over the heavens, there will be a similar conflict on earth. This will begin a time when governments are in balance. Some governments that seem powerful right now will fall and others will rise in their place.”

Rabbi Genut bases this on a verse in Isaiah.

In that day, Hashem will punish The host of heaven in heaven And the kings of the earth on earth. Isaiah 24:21

Judaism has a tradition of interpreting solar and lunar eclipses. In its discussion of eclipses, the Talmud (Sukkot 29a) specifically described solar eclipses as being a bad omen for the nations. Indeed, the complete solar eclipse that transversed the continental United States in August 2018 ushered in the most devastating hurricane season in US history.

The same source in the Talmud specifies that lunar eclipses are a bad omen for Israel since Israel is spiritually represented by the moon and the Hebrew calendar is figured by the lunar cycles. If during the course of the lunar eclipse the moon appears red, as the upcoming eclipse will be, the Talmud states that this is an omen that great wars will come to the world.

At the end of this section describing the omens contained within eclipses, the Talmud states a disclaimer: “When Israel does the will of God, they have nothing to fear from all of this,” citing the Prophet Jeremiah as a source.

Rabbi Yosef Berger applied this teaching in the Talmud to the current geopolitical situation.

“It’s not that the bad judgment symbolized by the lunar eclipse just disappears,” Rabbi Berger told Breaking Israel News. “It is merely averted to our enemies. In this case, the wars and evil will fall on our enemies. By choosing to be our enemies, the Arab nations have brought the evil that might have befallen Israel upon themselves.”

“This is especially true when the lunar eclipse falls on Tu B’Shvat, a day when only good can happen to Israel.”

In 2014 and 2015, the world witnessed four consecutive total eclipses of the moon, known as a tetrad.

Pastor Mark Biltz, the man who discovered that such events historically have been accompanied by significant developments for the nation of Israel, is keeping an eye on the next lunar eclipse, Jan. 30.

It’s called a “super blood wolf moon eclipse” because it will be a total lunar eclipse for parts of North America at a time when the full moon is at the closet point of its orbit to the Earth.

“The Super Blood Moon this year is also known as a wolf moon being the first full moon of the year. There are some incredible patterns that are happening that seem beyond coincidence,” Biltz told WND.

Biltz bases his celestial observations on Genesis 1:14, which says the heavenly bodies serve “as signs to mark sacred times.” He explains his findings in his book “Blood Moons,” which draws from earlier works, “God’s Day Timer” and “The Feasts of the Lord.”


The eclipse this month, he said, “just so happens” to be on the date of President Trump’s inauguration two years ago.

“Trump was born on the night of June 14, 1946, within 15 minutes of a total lunar eclipse and 700 days before the state of Israel was established. When he was sworn in as president on January 20, 2017, he was 70-years-old, seven months and seven days. Also, very significantly, the Super Blood Moon also falls on the Jewish holiday of Tu B’Shevat. Even more significant is the fact that there was another Blood Moon on Tu B’Shevat last year! Last year the blood moon was seen over the Middle East and this year will be seen over the U.S.”

Biltz said that from a biblical standpoint, having two blood moons on the same biblical holiday two years in a row is very significant.

“The Bible says that everything is to be established by two or three witnesses,” he said. “As a matter of fact the Bible says in Psalms 89 that God’s covenant with Israel and King David is forever and the sun and the moon are to be His faithful witnesses in heaven confirming that.”