» What is The Great Awakening? & Who is QAnon? 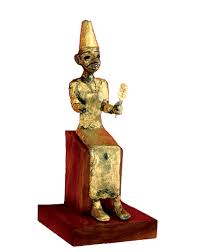 Idolatry is an economic issue. When we read about the Israelites worshiping the god Baal in 1 Kings 18, we tend to think of them developing a preference for wooden idol images. But the primary attraction to Baal wasn’t a pretty statue; it was an economic promise. For the nations around Israel, Baal was the “rider of the clouds,” who brought the rains and blessed the earth.When Baal showed up, the heavens rained oil, the rivers ran with honey, mothers gave birth to healthy children, and even the dead could be raised. Little wonder, then, that when King Ahab chose to marry a woman from Baal territory, the farmers in Israel built a house for this new god and welcomed him to the neighborhood (see 1 Kings 16:31).

Of course, most Israelites probably didn’t totally reject Yahweh, the God of Israel. They likely continued going to church, paying their tithes, and saying a prayer or two now and again—especially on holidays. They just added Baal worship to their insurance policy. After all, if you’re a farmer, it’s only practical to invest in getting the rider of the clouds to like you.


Yahweh would have none of it. He sent his prophet Elijah to tell Israel to stop “limping between two different opinions” (1 Kings 18:21 ESV). Through Elijah, God declared that Baal couldn’t deliver the goods and his people couldn’t have it both ways.

To win his people back, God demonstrated his power and mocked Baal along the way. Baal promised the rains, so God sent a drought at the word of his prophet (see 1 Kings 17:1). While Baal worshipers went hungry during the drought, God fed Elijah meat and bread delivered to him daily by carrier ravens (see v. 6).

Even on Baal’s home turf, people starved while waiting for Baal to bring his promised abundance. Meanwhile, in the midst of Baal country, God made oil and flour overflow for Elijah and his newfound friends (vv. 14–16). When Baal’s people died, it was Elijah who raised them to life (v. 22). Yahweh took care of his own while the king who had turned to Baal because of his claim to bring home the economic bacon wandered the countryside hoping to find a bit of grass for the few horses and mules who hadn’t died yet (see 1 Kings 18:4–5). Baal’s 450 prophets worked themselves into a frenzy, cutting themselves, dancing, and chanting to their god. “But there was no voice. No one answered; no one paid attention” (v. 29 ESV).

But God listened to his prophet. He sent fire from heaven. He sent the rain in torrents. He turned the hearts of his people back to himself. He solicited their allegiance, work, and worship—for himself and his kingdom. The battle for their hearts took place in part on the battlefield of their bank accounts. Worship, after all, is an economic issue.

From Pretty Statues to Silver and Gold: Jesus or Mammon?

Jesus knew all about gods such as Baal. He also recognized, though, that people in his day faced a new, subtler, and perhaps even stronger temptation: to treat money as an idol like Baal, an idol to worship as a god to get what they wanted. But humans cannot serve two kings. Jesus reminds us that when we try, we risk devoting ourselves to money and hating him (see Luke 16:13).


In fact, the New Testament teaches that money and greed are often the loudest and most appealing idols seeking to steal our attention. Paul declares that greed is idolatry, that to be greedy is to worship other gods (see Col. 3:5; Eph. 5:3). Once we remember that the Jews saw idolatry as the ultimate sin that put one outside the community of faith, we can hear the full force of Paul’s words. Idols had always threatened to steal the love, trust, and service God deserves and demands.By equating greed with idolatry, Paul provocatively told the church they didn’t have to go into a rival temple to worship another god. Their greedy hearts created other gods out of every coin in their coffers.

That’s why Jesus warned his followers to watch out for all kinds of greed (see Luke 12:15). His parables tell of farmers destroyed in the midst of their prosperity because they hoarded wealth and failed to be rich toward God (see vv. 16–21), of rich men sent to hell for their failure to let go of their wealth for the sake of their neighbor (see Luke 16:19–31), and of eternal judgment declared on the basis of one’s willingness to share with those in need (Matt. 25:31–46). All these parables point in the same direction:

money wants our worship. But every bit of ourselves we give to our stuff we snatch away from our true King.

Mauled by Money: The Cost of Economic Idolatry

The Bible also teaches us that the wages of our economic idolatry is death. “[People] who want to get rich,” Paul declares, “fall into temptation and a trap and into many foolish and harmful desires that plunge people into ruin and destruction.” (1 Tim. 6:9)

Stop for a moment. Do you believe that? That wanting to get rich inevitably causes such destruction? Paul goes even further. He writes that “the love of money is a root of all kinds of evil” that has led some to wander from the faith and pierce themselves with “many griefs” (v. 10). In Paul’s opinion, love of money wounds the worshiper, woos them away from the faith, and wells up in all sorts of other evils.


Because our material possessions so often seduce us into worshiping them like gods, they pose possibly the preeminent threat to worshiping Jesus. When we worship money, it mauls us. Money becomes a spiritual power that too often uses us rather than the other way around.

In a truly horrific passage, Jeremiah writes that our worship of idols consumes not only our “flocks and herds” but also our “sons and daughters” (Jer. 3:24). Our idols never stop consuming and destroying that which we hold most dear. In the end, “Those who make [idols] will end up like them, as will everyone who trusts in them” (Ps. 115:8 NET). When we give, we reflect the image of our giving God. But when we worship the idol of money, when our lives are oriented primarily toward earning, getting, and keeping, we become deformed, reflecting not the image of Yahweh, Lord of heaven and earth, but money, the god of me and mine. We become increasingly committed to a lifestyle of an abundance of possessions.

Such living falls far short of the life Jesus invites us to experience.

Excerpted from "Practicing the King's Economy: Honoring Jesus in How We Work, Earn, Spend, Save, and Give," by Michael Rhodes, Robby Holt and Brian Fikkert. Used by permission of Baker Books, a division of Baker Publishing Group.

Practicing the King's Economy: Honoring Jesus in How We Work, Earn, Spend, Save, and Give. With their experiences as a pastor, urban community development expert, and bestselling author of "When Helping Hurts" and president of the Chalmers Center for Economic Development, Michael Rhodes, Robby Holt, and Brian Fikkert offer eye-opening true stories of economic discipleship in action. They explore six key biblical themes of worship, community, work, equity, creation care, and rest to dig into what the Gospel means for how we use our resources.