MEN of the BIBLE and LESSON

MEN of the BIBLE and LESSON 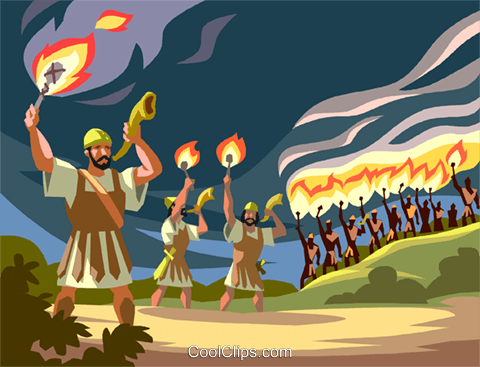 2 Lessons From Gideon And His Army

https://www.oneforisrael.org/bible-based-teaching-from-israel/bible-teachings/2-lessons-from-gideon-and-his-army/
By ONE FOR ISRAEL (Messianic Jews In Israel)
Share
It’s almost as if the angel was being sarcastic.


Pfffff! Mighty man of valor indeed. Gideon was not an obvious candidate to be a hero in God’s army. He was secretly threshing wheat, hiding it from the Midianite oppressors in a winepress, when the Angel of the Lord appeared to him (and by the way, the Hebrew shows it really was THE LORD – Yahweh). Gideon was feeling defeated, discouraged and helpless after many years under harsh, Midianite tyranny. He from the poorest family in his tribe, and was the least among his household.


He needed a LOT of reassurance. At first he was afraid to act in broad daylight, but gradually Gideon found the courage to step up to the task.


“Then Adonai turned toward him and said, “Go in this might of yours and deliver Israel from the hand of Midian. Have not I sent you?”  (Judges 6:14)


He might have been afraid, but as they say, “feel the fear and do it anyway!” Gideon was on his way to becoming the mighty man of valor the Angel of the Lord knew he could be.


The difference between fear and cowardice
We all experience fear, but it’s how we respond to it that counts. Courage looks fear in the eye and refuses to obey its demands. Courage tells the fear to be silent and instead rises up to do what is required, no matter how scary it may be.


Cowardice, on the other hand, buckles.


I was shocked when I saw the first people on the list to be thrown into the lake of fire at the end of Revelation were – you guessed it – cowards.


“But for the cowardly and faithless and detestable and murderers and sexually immoral and sorcerers and idolaters and all liars—their lot is in the lake that burns with fire and brimstone, which is the second death.” (Revelation 21:8)


The cowardly and the faithless are in a similar group. Both have chosen what seemed to be the more safe and self-serving route. Cowardice does not, however, pay off in the end. And I think you might agree that we are rapidly approaching the end. Conversely, courage and faith will reap dividends.


But back to Gideon and his army.


Gideon had blown his shofar and gathered the tribes of Israel to fight the Midianites. 32,000 Israelite men showed up to face over 135,000 Midianites1 – they were outnumbered by well over 10:1. But then God says this:


“Now therefore proclaim this in the hearing of the troops, ‘Whoever is fearful and trembling, let him return home.’”  (Judges 7:3)


Over two-thirds turned back.
Still, the remaining 10,000 were decidedly brave.


But as we know, God doesn’t stop there.


“The people are still too many. Bring them down to the water and I will test them for you there.”


God is setting up a scenario in which the victory will be indisputably miraculous. There can be no room for human boasting. At all. But his next test is weird.


“You are to set apart everyone who laps the water with his tongue, as a dog laps, and everyone who bows down on his knees to drink.” Now the number of those who lapped, putting their hand to their mouth, was 300 men, but all the rest of the people bowed down on their knees to drink water.”


God tells Gideon to distinguish between water drinking styles – the dog-style lappers on one hand and the kneelers on the other. The 300 lappers were picked. What was with that test?


Some suggest that the lappers were more alert and therefore better equipped, others say they were more fearful enabling God to show his power… Rashi, the famous Jewish commentator suggest that the kneelers are akin to idol worshipers. It’s all a bit bewildering. Here’s my theory, based on the idea that it’s always worth looking for what doesn’t make sense in the Bible, and go from there. God always – ALWAYS – has his reasons.


Firstly, humans do not drink like dogs. At all. Dogs stay on their feet, and drink directly from the water with a tongue that (unlike our tongues) is designed to scoop up water into the mouth. Google it – it’s cool. But we are anatomically completely incapable of lapping like dogs.


Secondly, both groups are drinking from their hands, if you read it carefully. The only difference is, one group is lapping “like dogs” while the other group is kneeling. Maybe Rashi has a point with the kneeling, but what’s with the dogs?


Whole-hearted
if it’s not about the physical process of imbibing water, in what manner might a human be said to be drinking “like a dog”? Perhaps in a very primal fashion – focused only on getting the water. Enthusiastic, unselfconscious, shameless! Dogs in the bible can be fierce, even rabid, and are often despised or worthless2. But as anyone who has a dog will know, they are also fiercely loyal and loving creatures.


Perhaps it’s no coincidence that the Hebrew word for dog in is kelev (כלב) which includes the word “heart” (לב). We also see in the name of Caleb, (כלב) contemporary of Joshua, that this link is evident. Both in Deuteronomy 1:36 and later in Joshua 14:14, he is commended for his whole-hearted devotion.


Now whole-heated devotion is also something that characterizes dogs, I think you’ll agree. Is that what God was looking for?


To be full of courage, we need to be fully committed to our cause. Dedicated and whole-hearted. We may need training and preparation, to be equipped and ready, but the battle belongs to the Lord. He is the one who comes up with the ingenious strategy, and he is the One who gets the victory. All the 300 men had to do was to show up, brave and wholehearted, and follow God’s lead.


This surely applied to us, and whatever battles we may be facing. We do not need to have the power to conquer, nor even the strategy! All we have to do is to come to God in our weakness, as Gideon did, willing to stare down our own fear and dedicate ourselves wholeheartedly to God’s leadership.


He is looking for people of courage and faith, people who are wholeheartedly devoted  to him. You’d be amazed what God can do with people like that.


“Take heart, I have overcome the world!” Jesus assures us. Adonai is with you, dear man / woman of valor!

Judges 8:10 Now Zebah and Zalmunna were in Karkor with a force of about fifteen thousand men, all that were left of the armies of the eastern peoples; a hundred and twenty thousand swordsmen had fallen. Calculating from this passage, the armies of the eastern peoples (Midianites) began with 135,000 men. (See also John Gill Commentary – “for there fell an hundred and twenty thousand men that drew sword; besides infirm men, women, and children, which may reasonably be supposed; so that this host consisted of 135,000 fighting men”). – Answers.com
https://www.blueletterbible.org/lang/Lexicon/Lexicon.cfm?strongs=H3611&t=KJV