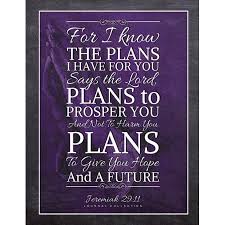 What Does Jeremiah 29:11 Mean?
For I know the plans I have for you"-[this is] the Lord's declaration-"plans for [your] welfare, not for disaster, to give you a future and a hope.
https://dailyverse.knowing-jesus.com/jeremiah-29-11
Jeremiah 29:11(HCSB)
Verse Thoughts
Jeremiah warned Israel to stop their idol worship, which had replaced their devotion to God. He demanded the destruction of the pagan gods they hold dear and every false deity in which they trusted. BUT GOD Who is loving and gracious, long-suffering and faithful, pronounced His bitter rod of severe chastening.. due to their apostasy, would also prove to be a blossoming staff of sweet comfort and peace, grace and mercy - love and hope and joy.
And so Jeremiah wrote a message of comfort to the Jew who had been exiled to Babylon, with King Jeconiah.
His letter was addressed to the elders and priests, the prophets and the queen mother, the court officials, princes, craftsmen, and all the people. He promised that God's future plans for His people were rooted in His never-failing faithfulness towards them. He gave them a promise of future peace and wonderful hope - not a pledge of punishment that would result in their ultimate disaster and destruction.


They were to acknowledge that God had ordered their exile in Babylon and not Nebuchadnezzar. Their deportation from the promised land was to be recognised as a punishment for the nation's apostasy. But despite their disobedience toward the holy one of Israel, the gracious thoughts God has towards His people, and the future plans He had prepared for them, were designed to prosper them and bring them peace and comfort, safety and success. it was not a scheme to harm them or bring them disaster.


God's instruction to His people was to settle in Babylon and not expect to return immediately to their homeland. They were to settle down and build houses. They were to plant gardens, get married, have children, and even look forward to their grandchildren. They were to live quiet lives in Babylon and contribute to the welfare of the city and the well-being of its citizens. And they were instructed to pray for blessings on their captors.


God promised that if they were patient and submitted to His words, they would thrive as a nation, and the city would prosper. Indeed, over the years, the stigma of being in bondage as slaves would reduce and their autonomy as a people-group would flourish. They were to harken to God's word and be careful not to be hood-winked by the deceptive teachings of false prophets, and they were given a promise that at the end of 70 years, the Lord would restore them to their homeland.


Jeremiah's letter to the Babylonian exiles encouraged the people and brought with it a beautiful promise: "For I know the plans I have for you" declares the Lord, "they are plans for your welfare and good, and not for disaster. They are plans to give you a future and a hope.


Jeremiah's prophecy was fulfilled, in part, when God graciously started to bring back His people to their land and reestablish them in the holy city of Jerusalem. It began with an edict of Cyrus the Great, and continued with other great kings of Babylon and Persia. Those that obeyed God's word returned to their homeland with Ezra and Nehemiah, while those who remained were really disobeying God's call to return.


But God in His grace even used exiles, like Esther and Mordecai, who chose not to return to their homeland, at the end of the 70-year long exile, as instruments to save many Jewish lives from the evil plot of wicked men like Haman, and He graciously blessed many Men of Israel on The Day of Pentecost: "Parthians and Medes and Elamites, and residents of Mesopotamia, Judea and Cappadocia, Pontus and Asia, Phrygia and Pamphylia, Egypt and the districts of Libya around Cyrene, and visitors from Rome, both Jews and proselytes, Cretans and Arabs- for these people would have been descendants of Babylonian exiles, who heard the gospel of Christ in their own language and tongue - and were saved.


God still has a future plan for Israel's well-being, just as He has for all God's children. His plan of redemption is designed to give all who believe a future... filled with hope and not with calamity. This glorious verse of comfort sparkles with reassuring radiance, that the future plan God has for all of His people, (both for Israel and the Church), are for our eternal good and spiritual welfare, as well as our temporal and physical needs.


The Lord desires the best for His children even though we may stray far from Him. His plan for His children is to give us a future and a hope. He knows that only as we sever our reliance on the world's destructive securities and rest our trust entirely on Christ Jesus our Lord, will we break free from the yoke of this world's slavery.


We have an assurance that whatever we may have to face today, God's thoughts toward us are only good continually - "for I know the plans that I have for you", declares the LORD. "They are plans for peace and not disaster - plans to give you a future filled with hope".


My Prayer
Thank You, Lord, for the good plans You have purposed for me and for all Your children. Enlarge my vision of You and enable me to trust Your word of truth through all the circumstances of my life, knowing that Your thoughts towards me are only good continually. Thank You, Father, that all things work together for good, for those that love You and are fitting into Your plans and purposes. Continue to keep and protect Your people Israel and we pray that many would come to trust in Jesus, their Messiah, and King. This we ask in Jesus' precious name and for his greater glory and joy, AMEN.
https://dailyverse.knowing-jesus.com/jeremiah-29-11