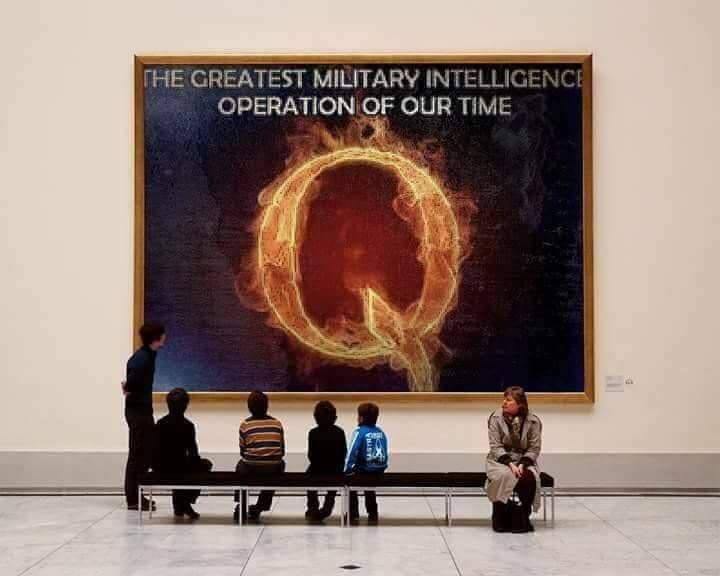 ☆ WHAT IS Q?
QAnon is military intelligence! It is a global operation to bring about a Great Awakening of humanity through the dissemination of information that will break us free from the lies and propaganda we have been told for our entire lives. Through complex military code and "future proves past" they have given us a full break down of what is about to happen in global politics and the world stage.

Anons/Patriots across the world who have been following this information are now 1 and a half years ahead of the Mainstream Media. This is why Q arrived, a backchannel to the populace of the world to prepare us for what is going to occur.

Simply put they are here to help you all understand the nature of your world, to help you learn how to critical think and discern propaganda, while simultaneously bypassing the FAKE NEWS MEDIA so that they can talk directly to you the people.

They are what we call 'The Alliance'.

☆ WHAT IS FUTURE PROVES PAST?

This is when Q will drop information that has never been publically available anywhere before. Basically it is a means of telling us what's happening without breaking NATIONAL or OPERATIONAL SECURITY!

- For example, Q retweeted an image of a Trump tweet from on the 14th of November 2017 in which it was a picture out of Air Force One on the way back from his ASIA tour saying "THANK YOU ASIA!" #USA :flag_us:. This was posted as a reply by Q underneath that image on the 9th of May 2018 which said:

Now this is where 'FUTURE PROVES PAST' because on the 12 of June 2018 this happened:

Thus beginning the denuclearisation and Unification of the Korean Peninsula. This is one of hundreds of Future Proves Past instances, but it is one of the best!

These 'Proofs' could simply be a few months or even a few hours, some are a year but this is how Q gives us important information and was in effect the reason that proved their legitimacy in the beginning. There are now hundreds and hundreds of #QProofs and they have been legitimized over and over again.

☆ WHAT DO [THESE] WORDS MEAN THAT ARE ENCLOSED IN SQUARE BRACKETS?

These are used by Q team and we call them 'killboxes'. This terminology basically means that whenever a phrase, person or entity is within one of these boxes it means they are likely to be exposed, resign or face justice very soon. It's just another way of saying they are going to taken out of the picture so to speak.

☆ WHAT IS 'THE PLAN'?
For as long as there has been humanity there has been DARK and LIGHT! Duality if you will, over the course of thousands of years this world has succumbed to darkness. This ancient cabal of people chose to enslave our world for their own self interests and power. Back in the 1960's there was a President who's name is well known across the world. - John F Kennedy (JFK).

If you have heard his famous 'secret societies' speech then you will understand what he was doing.

Here is the speech:
https://youtu.be/YafZkjiMpjU

As you are all aware he was shot in the head on November 22nd 1963 for his role in trying to bring down this very evil matrix of control that was built by the likes of the Rockefellers, Rothschilds and Soros' of the world. The families that run this planet go very deep and follow their own bloodlines back thousands of years. Let's not forget that another patriotic President in Ronald Reagan was also gunned down during his Presidency, although that time they did not complete their mission and he lived. Every President, Prime Misister or head of state around the world since then has worked against the will of the people and has secretly been working on the side of [The Cabal].

Until, 2016!
The year that changed the course of history forever. This global military alliance that has been covertly infiltrating this sick network since the days of JFK asked Donald J Trump to run for President knowing that he would make the perfect fit as the public face for 'The Alliance'. As you can see, since his inauguration the global order is shifting. The many events that have come to pass since 2016 are all part of "setting the stage" for the exposure of these evil institutions and puppets and the roles they have played in enslaving the human race and the heinous crimes that have been committed on a truly global scale.

Nothing is more important than transparency and that is what will now be occurring with DECLAS.

☆ WHAT IS DECLAS?
This is the Declassification of all FISA (Foreign Intelligence Surveilance Act) warrants that were obtained to spy on President Trump and his campaign beforehand. This was an attempted 'coup' on the President of The United States in which the UK government played a significant role as did many others like Australia and Italy, all will be revealed when this starts to be declassified. This is the biggest scandal in world history.

This also includes the Declassification of the IG Report.

☆ WHAT IS THE IG REPORT?
There are many different ones that are to be released over the coming months and years but this will involve the Inspector General and all their investigative might outlining a report on the abuses of power in the 2016 election among other things. It will demonstrate the complete abuse of all government agencies and the weaponisation of them against a political opponent. This will be a broad and very complex report on the corrupt players and the networks they were using to obstruct the Trump campaign and now administration. It will show all of the lies propagated by political assets and media opponents pushing the fake Russian narrative even though it was those who are complicit in COLLUSION.

Trump has been completely exonerated over and over again.

All of this is what we call #SPYGATE and it is a big part of learning about Q hence why I have touched on it here.

You are witnessing the greatest insider information in world history, helping you to understand the great things that are coming to this world and the complex nature of what it takes.

Hold onto your seats because what you are seeing is the dismantling of a very old and outdated system. A new one is being born in its place. A benevolent one. Its just going to take some time.

Remember how many poor souls have succumbed to these lies, it's all they know, it's all they listen to. To break the cycle of brainwashing is going to take something special, something profound.

That is why we have Q.
To bring about critical mass.
Form an awakened army to help those still asleep.
Prepare for the greatest show the world has ever seen.